They call Brighton “London-by-the-Sea”, and the nickname fits. Brighton has a lot of the hustle and bustle of London, but with the added advantage of not being landlocked. So when the stress of city life gets to be too much for you here, you can go hurl yourself into the English Channel - or simply hang out on the beach and relax, which is what all the other Brightonians do (along with half the population of London on the weekends). 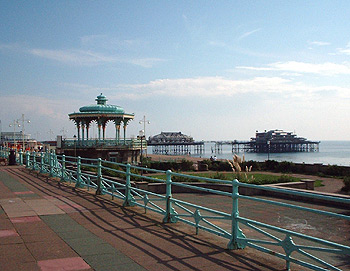 It took me a while to get used to the English concept of “beach”. I spent a lot of childhood summers in St. Augustine, Florida, where the air tasted of salt, the sand on the beach was white and hot and soft as ash, the only pier I remember was made of wood and used for fishing, and I could hear the crash and rush of ocean waves all night long when I slept on the screened-in porch of my grandparent’s beach house. I guess this was imprinted in my mind as being the archetype of a beach, so when I saw Brighton Beach for the first time, my initial instinct was to gape and say, “You call this a beach?”

First of all, there is no sand - there are rocks. The air on the beach rarely smells of anything other than fish and chips. One of the two piers is (well, was - I’ll get to that in a minute) a dilapidated Victorian confection closed off to all but the most intrepid starlings and seagulls; the other pier, with its arcade games, carnival rides and greasy food stalls, is a veritable emporium of all things loud, cheap and tacky. The “promenade” bit of the beach is lined with bars, clubs, cafes, chip shops and souvenir stalls, with the occasional art gallery tucked in there for good measure. And, unless it is the middle of winter and there are gale force winds, there are always people on the beach. Many, many people. 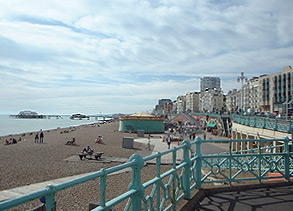 As shocking as all of this was to me at the start, I have come to like Brighton Beach for what it is. The first thing I really fell in love with in Brighton was the West Pier. When I moved here, the West Pier was in a state of slow, picturesque decay. With its elaborate silhouette, ornate rooftops and peeling paint, it seemed to encapsulate the faded grandeur of all of Brighton. Decrepit as it was, it was still beautiful and intriguing when the sun glanced off of it, like in the picture below (taken in June 2002). 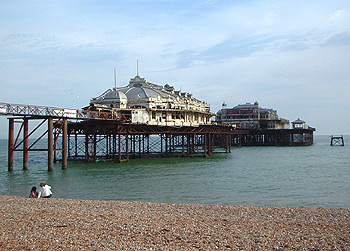 But I always thought the West Pier really came into its own when the weather was bad. Then it would rise up out of the frothy waves like some lonely leviathan, its dark eyes staring out at the green sea. The gloomy old pier loomed larger on stormy days. It’s abandonment took on an edge of menace; its eerie sadness twisted into something more sinister. 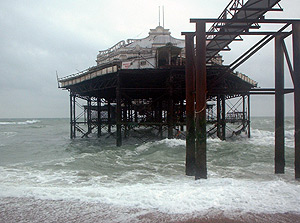 When the sky was low and grey, the windows of the West Pier filled up with mysterious shadows and Victorian ghosts, and I would feel a delicious shudder of terror at the thought of standing out at the end of the fragile structure and watching the waves claw at the pier’s supports, trying to bring it down into the churning water. 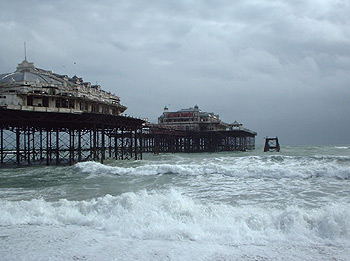 Unfortunately, the waves eventually succeeded in doing just that. In December of 2002, a winter storm caused the front part of the pier - the old concert hall - to collapse partially. It was painful to see the grand old pier slumping into the sea, but the damage really wasn’t too bad, all things considered. The West Pier still managed to retain its strange, shabby charm, despite the fact that half of it looked like a deflated wedding cake.

The worst, however, was yet to come. 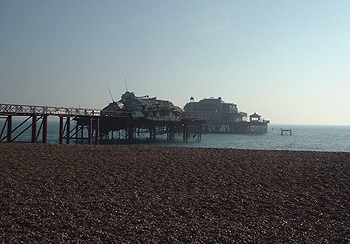 On March 28, 2003, the West Pier caught fire. It was probably arson, but the culprits haven’t yet been found. I wrote a bit about the fire here , so all that really remains to be said is that this picture breaks my heart. (Thanks to Tim at Motionpath for the photo.) 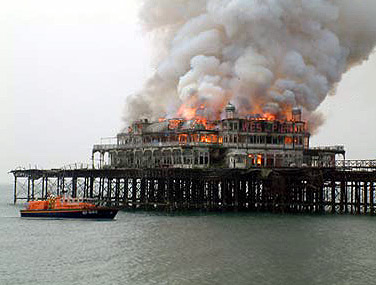 This photo was taken few hours after the last one, by which time the pavilion on the pier had been reduced to a smoldering wreck. The helicopter circling endlessly added to the slightly apocalyptic feeling on Brighton Beach that afternoon. 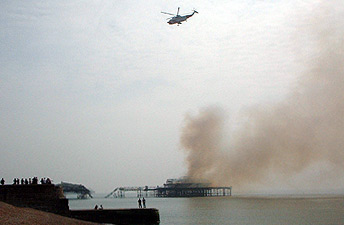 After the pavilion fire, the main part of the lovely old West Pier was just a charred skeleton. The outline of the building remained, but all of its dark corners and crumbling secrets had been burned away, leaving it blank and empty. It was at this point the West Pier started to look less like a faded beauty and more like an out-and-out eyesore. But it was still standing, sort of, and still partially intact, kind of, and I was absurdly proud of its tenacity. Wind, rain and fire had not entirely eliminated it, and at least the starlings still had a place to nest in the - albeit somewhat compacted - concert hall. 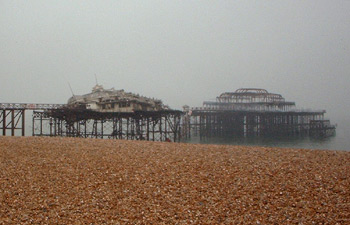 Until the next fire, that is.

On May 12, 2003, the West Pier was done in for good. Another fire broke out (I should say, was set) on the pier, this time in the collapsing concert hall. There was nothing to be done, really, but watch it all go up in flames.

And now there is really, truly nothing left. The crumpled, blackened beams and girders of the old pier look dreadful and pathetic, and even the knowledge that the whole thing is due to be restored does little to assuage the feeling of loss. I think at this point, I’d rather see nothing there than to have to look any longer at the miserable remains of my beloved pier. 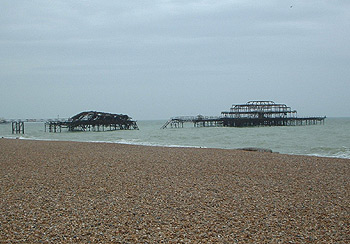 However, Brighton Beach has more to offer than just the remains of a once great pier. It also has proper English seaside treats like… well, like jellied eels, for one. I’ll admit, I have yet to try any jellied eels. I have had the occasional little tub of cockles, whelks and mussels, though. They’re salty, chewy and gritty, but somehow also quite lovely when sprinkled with a bit of malt vinegar and consumed on a cold, blustery day by the sea. 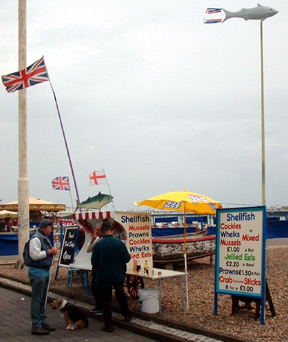 There’s actually a bit of cockle competition going on in Brighton: not one, but two different stands offer the oceanic treats. I never cease to be amazed that people actually sit around on the beach and eat the things. Of course, in the picture below, the little seafood hut is conspicuously empty; everyone seems to be crowded around the hut to the far left - which, incidentally, sells postcards and prints of the West Pier in various stages of decay, collapse and incineration. 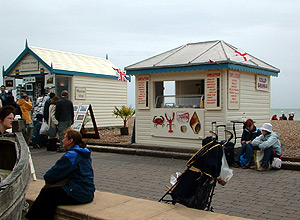 The two little seafood stands are affiliated with the two little fish shops on the seafront. Brighton is a seaside town, but it’s not much of a fishing town anymore. These two little shops are all that remain of what I imagine was once a booming trade in fresh fish. The two shops now focus on the bit of fresh fish they can get (mackerel, haddock, cod), along with prawns, rollmops and various types of smoked fish and pate.

You can’t actually see it in this picture, but at the bottom of the beige sign immediately to the right of the “Traditional Fish Smokers” sign, it says “BEWARE OF IMITATORS”. I’m not sure who they think is imitating them - the one other fish shop on the seafront? Most curious. Well, they may be paranoid, but their fresh grilled mackerel sandwiches are scrumptious and second to none. 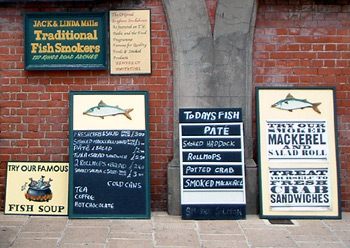 Since the demise of the West Pier, this tiny smoke house has become my new favorite thing on the seafront. It reminds me of the Lincoln Logs that I adored as a kid, and it smells faintly of hickory smoke, which is one of my favorite smells in the world. And it’s just so cute and so tiny and ever so slightly incongruous that I can’t help but like it.

Then there is, of course, the “other” pier. This is the Palace Pier, which has tried to rename itself the Brighton Pier in the hopes that everyone would forget Brighton actually has two piers and that this one is not the nicer of the two. Sure, the Palace Pier is good for a laugh when people come to visit, and perhaps it’s more true to the spirit of the English seaside in the 21st century than the West Pier was, but still… if the Palace Pier fell into the sea or burned to a crisp, I wouldn’t so much as blink at its passing. No, there’s only one kind of pier for me, and that’s a quiet, spooky pier. 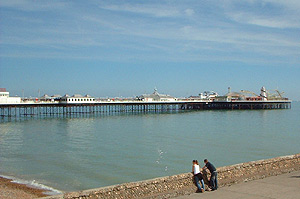 Well, even without its best feature, the beach in Brighton is a nice place to kick back with a beverage and watch the world go by. The beach has a million different faces - wild and desolate in the winter, packed with kids and sunbathers in the summer, quiet in the mornings, serene at sunset, sparkling in the daylight, thronged with drinkers and dancers around the clubs at night. I like some of these faces a lot more than I like others, but I’m willing to take the good with the not-so-good if it means that occasionally I can stand by myself in silence at the water’s edge to watch the waves break against the shoreline and take delight in the fact that I live by the sea. 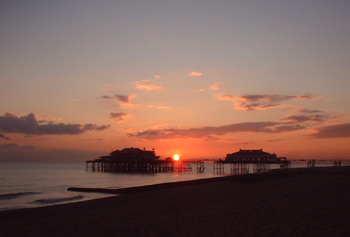 My wife and I love the seafood restaurant on the sea-front.Whenever we can,usually after visiting my father at Arundel,we eat there.

I felt compelled to read the rest of this site - even though I first found it via the Dirkie page. Your photographs are lovely too. I’m a photographer.

With regards to ‘Beware of Imitations’ I think this used to be a custom amongst us Brits for every small business to put it somewhere in their advertising, as some kind of testimonial to their standards!

I still have lots more of your site to read yet. Bye for now.

Oh my god, that’s so sad. The pier looked so beautiful and old and quiet and just….eerie. And your pictures are just excelent