On our second day in Tokyo, Jeremy and I participated in a geek outing to Akihabara, home of all things electronic and otaku. The first thing I spotted outside the first store we stopped at was a display with cuddly edamame toys. Since the opportunity to purchase tiny and/or anthropomorphized foodstuffs was pretty much the whole reason I went to Japan (I’m just kidding…mostly), I got myself a little fuzzy edamame pod—the first thing I bought on the whole trip. 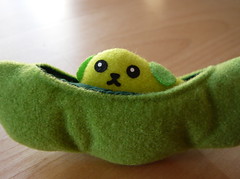 The edamame toy display was set up around a television showing several brief animated films featuring various speaking legumes. I wound up standing next to it for a bit while we waited for our friends to finish shopping, and though I was only half paying attention to it, the little theme tune insinuated itself into my brain, where it remained firmly lodged for days afterwards.

Several days later I was in a department store, and lo, they also had the edamame toy display with the animated films and catchy little theme tune. This time I really watched the animations to find out what they were all about, and…well, I think I got brainwashed, because from then on, I was completely obsessed with the talking edamame thing.

Jeremy can attest to the fact that I subsequently spent (ahem) a rather long time researching the talking beans online. Just a month ago, there wasn’t a lot of English information about them to be found, so I had to painstakingly piece together what little info I could find with what little Japanese I could understand.

What I discovered was that the beans are called Mameshiba (or “bean dogs”), and they are apparently characters in some new anime show. In the animated shorts, when the bean, pea or peanut pops out of its shell, it dispenses “one-a-day bean factoids” like: “Did you know that millions of bacteria live in a kangaroo’s pouch?” Why this makes people turn grey and shadowy as if they’re having an existential crisis I do not know. What I do know is that the bean-dogs’ sweet little voices and big shiny eyes in combination with the dramatic music and the humans’ obvious distress at being spoken to by their food makes for one seriously weird cartoon. Which I absolutely love.

Have you tried playing all of the videos posted here at the same time? It’s pretty funny…

How could you possibly eat the little bean after it had a little chat with you?

They are so cute!