When I wasn’t running around pretending to be an Ewok as a kid, or assembling Lego spaceships, or playing Dungeons & Dragons, or otherwise being something of a tomboy, I was dreaming of being a ballerina. 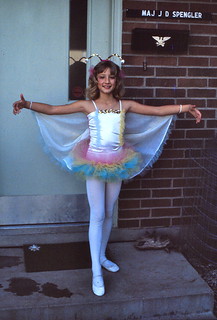 I took ballet classes as a 7-year-old and got to dance in a recital wearing a candy-colored tutu and golden deelyboppers on my head (I believe we were supposed to be fireflies). I was tall for my age, and skinny, and flexible, so I made a pretty decent kiddie ballerina. I even got to dance right at the front of the stage.

But then we moved, and eventually I started taking piano lessons, and I played violin in the school orchestra, and I contemplated joining the swim team, and ballet fell by the wayside. But I still had the tutu, and I would get my little brother to don a leotard and dance around with me in the garage. There are pictures of this, but for my brother’s sake they will not be revealed here. They’re incredibly cute, though. Less cute was the time I swung an umbrella during one of our dance routines and knocked over some shelves which hit my brother on the head, causing him to bleed profusely. I dragged him into the house, blood pouring down his face, both of us in ballet gear, and found my mom talking to a neighbor who had come over to welcome us to the neighborhood. The neighbor remains a dear family friend to this day, so I guess she wasn’t too put off by the sight of a small boy bleeding all over a tutu.

I didn’t go back to ballet class until I was 13 or 14, at which point being tall for my age was no longer a benefit, and flexibility didn’t quite make up for adolescent awkwardness. But I loved everything about ballet; I subscribed to Dance Magazine, I read the harrowing autobiographies of professional ballerinas, I had pictures of pointe shoes all over my walls (squeezed in between the Rodney Matthews posters, and later between pictures of Bono). I saw the Stuttgart Ballet perform Sleeping Beauty and longed to be up on stage with those flawless dancers. My favorite German teacher had a Stuttgart Ballet poster on her classroom wall, and I desperately wanted one, too. When I asked where I could buy one, she said they weren’t actually for sale; the chamber of commerce had given it to her because she was a teacher. My dejection must have been written all over my face, because at the end of the year she quietly took me aside and handed me a roll of paper secured with a rubber band: the poster from her wall.

There was a slightly older girl in my teenage ballet class who used my class as a warm-up for her pointe class right afterwards. That girl fascinated me with her slender limbs and graceful hands, her long straight hair pulled up in a classic ballet bun. She seemed to float effortlessly when she did a grand jeté, whereas I constantly felt gravity pulling me back to earth. She was small and lithe, whereas I felt lumbering, gigantic. She moved with a precision that (has) always eluded me. I envied her. I still do. 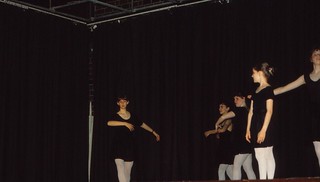 Exactly seven years after my first ballet recital as a 7-year-old firefly, I danced in my last ballet recital. No candy-colored tutus this time, just tasteful black leotards and black mesh skirts that swished lightly as we twirled across the stage. The older girl danced a solo to the swan theme from Swan Lake, and I can still see her pas de bourrée-ing in her pointe shoes at the center of the stage, her arms rippling like water as the music crescendoed. It seemed like perfection. I bought my own pointe shoes soon after, even though I was nowhere close to being able to use them. I did manage to hoist myself onto my toes a few times by holding onto a countertop or the back of a chair, but that was the extent of it (and I’m surprised I didn’t sprain my ankle in the process). A few months later we moved again, and the ballet gear got put away for good. And with the exception of a modern dance class I took in college for PE credit, and then a whole lot of gothy swaying in smoky German clubs, my dancing days were over.

During a lunchtime conversation with my friend Jane last year, it emerged that we both quite wanted to go see a ballet. To our surprise, our respective significant others were up for it too, so on a chilly November evening we filed into the Theatre Royal in Brighton to watch a performance of Giselle. I think we were all somewhat perplexed by it (not least because we had no idea what was going on narratively), but we enjoyed it enough that we went to see The Snow Queen just two months later (and this time we all brushed up on the story in advance). During both ballets, my cynical adult self felt there was something faintly ridiculous about all the overly-dramatic gestures and mannered leaping about on stage—but my inner 7-year-old firefly was completely won over by the sparkly outfits and satiny pointe shoes, the precise arabesques and dizzying pirouettes.

A few days later I found myself idly Googling “adult ballet Brighton.” And a few days after that I stood in an overheated studio at 10 o’clock on a Monday morning with hastily purchased canvas slippers on my feet, smiling and shuffling nervously along with a roomful of other women (and one man) of all shapes, sizes, colors and ages who had (if they were anything like me) quashed their fears of looking like a complete idiot and shown up for their first adult beginner’s ballet class.

That first class (a free taster session for anyone who was interested) was a bit of a trial, to be honest: too many people squished into too small of a space with the heating turned up too high. I remembered having good turnout as a kid, but now I felt my knees straining as I tried to stand in the proper position. My feet are fairly “bendy,” but I struggled to keep my toes pointed during the exercises at the “barre” (actually a windowsill). When we moved to the center, I found I suddenly couldn’t tell left from right. And when we did little leaps across the room at the end of class, I felt as ponderous as an elephant—and just as awkward as I had at the age of 14.

But I went back again the next week. And it was still sweaty and strenuous, and I still couldn’t keep my toes pointed, but there was a moment near the end, as we were doing the little leaps again, when my feet left the floor and I flung my arms wide, and a giddy, breathless thought flashed through my mind—“I’m dancing! I’m a ballerina!”—and suddenly I didn’t feel ponderous or awkward, I just felt pure bliss.

So, of course, I’ve been going back ever since. I’m a few months in now, and I’ve bought two pairs of proper ballet slippers, and a little skirt, and even a leotard. The classes have gotten easier in as much as my body is starting to remember what ballet feels like—but my body is almost 30 years older than the last time I tried to do any of this. In the intervening decades I’ve been treated for lower back pain, neck and shoulder pain, a dodgy right knee, and what I suspect was a hairline fracture in my foot. My hips are tight from sitting in an office chair all day, and I certainly can’t just plonk down into the splits like I used to. And, most obviously, I’m still really tall, with correspondingly large feet and the figure of a woman who unabashedly enjoys good food. Oh, and my right leg is slightly, but measurably, shorter than my left. So a perfect wisp of a ballerina I am not.

But somehow it doesn’t matter. More than one person has mentioned the courage it takes to start something like this as an adult, but I honestly can’t say that I had to screw up my courage to do it. Sure, there have been a few hangups to overcome—worrying about looking silly, or getting things wrong, or just not being very good at something you’re doing in front of other people—but when I get it into my head that I want to do something, I have to go do it, and my single-minded compulsion to satisfy that desire generally outweighs any fears (see also: attempting to learn how to sail, which was way more scary because it’s, like, actually dangerous; the worst that’s likely to happen to me in ballet class is that I fall over and look like a dork).

And maybe I’ve just gotten lucky, but my ballet class is a very safe, welcoming, happy space. Some of the women are younger than me, and some are considerably older. Some have an enviable grace and ease when they move, and the rest of us (most of us) happily muddle along as best we can, giggling as we try to remember the steps and not bump into each other. I’m always excited before class, and always I’m exhilarated after. The ballet obsession has returned. I practice grands battements in the kitchen and do pliés while I’m brushing my teeth. I’ve even gotten it into my head that maybe, maybe, if I work hard enough at it, I can eventually use those old pointe shoes after all.

Perhaps it is silly to put on a sparkly little skirt and fling myself around pretending to be a swan, and perhaps I’ll get frustrated and lose interest when I really run up against the limitations of my body and my age. But right now, adult beginners ballet brings me joy, and silly or not, that’s no small thing.

Note: As I was writing this, I came across another account of an adult beginner ballerina—and, basically, yes. Yes to all of it.