Everything feels dark and scary right now, and I’m constantly tired and worried and angry about so very many things, and I don’t really have the physical energy or psychological wherewithal to work through any of it.

So here’s something beautiful instead. The Royal Ballet has been streaming live performances from the The Royal Opera House (without an audience) since June, and I’ve watched them all with a smile on my face and lump in my throat. The Royal Opera House is hallowed ground for me. I fell under its spell the first time I stepped into the magnificent building in January 2017 to watch The Nutcracker with my friend Alison. It’s a place of pure magic and I adore everything about it, from the red velvet seats and sparkling blue ceiling to the tiny little lamps that adorn each tier in the auditorium (I especially adore the tiny little lamps). I want nothing more than to step in there again, sit in one of those velvet seats, and watch a ballet spectacle unfold before me. But for now I have to watch from my decidedly un-velvety sofa. 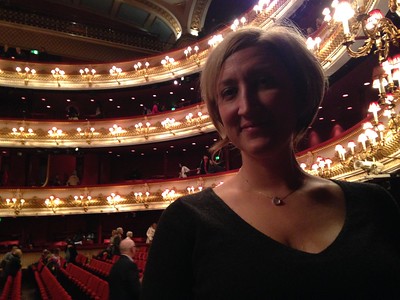 In one of their earlier streams, the Royal Ballet performed the finale to Within the Golden Hour, a contemporary ballet originally choreographed for San Francisco Ballet but revived and revised by choreographer Christopher Wheeldon and designer Jasper Conran for the Royal Ballet several years ago. I’m a big fan of contemporary ballet, and I was dazzled by the intricate patterning on the stage, the glittering costumes and the driving score by Ezio Bosso. I watched the piece over and over again, for as long as the recording was available, finding its warm exuberance to be the perfect tonic for the times.

The Royal Ballet was supposed to be back on stage in front of an audience this month. Last month they announced a mixed bill which would include a full performance of Within the Golden Hour, for a limited number of people in the main auditorium. And I really, really, really wanted to go. I wanted to sit in my favorite theater and witness that golden spectacle in person. And for the briefest of moments, I flirted with the idea of actually doing it. But I knew the flirtation was nothing more than a fantasy. There was no way to justify an overnight trip to London to see a ballet, not given the Current Situation.

It was all moot anyway; when the new lockdown was announced, the Royal Opera House had to shut its doors once more and the live performance was canceled. But not quite canceled—it still went ahead with a small audience of opera house staff, and it was streamed online. I watched the recording on Saturday afternoon, curled up on the couch with a cup of tea, and it was a solid two hours of beauty and bliss. The whole gala was a delight, with 12 very different works, including short contemporary pieces and excerpts from classical ballets, culminating in Within the Golden Hour, all shimmery, playful, moving and joyous.

You can hear a tiny bit of the music from the glorious final section of the ballet in this clip. The full gala show is available on demand until December 13th, and here’s a peek of one section from Within the Golden Hour, a mesmerizing quartet with dancers Hannah Grennell, Mayara Magri, Anna Rose O’Sullivan and (one of my favorites) Fumi Kaneko. It won’t be to everyone’s liking, but this is my light in the darkness right now.