My desk sits in a little alcove in front of a window that looks out onto our street. The street isn’t very wide, and the other side of it is lined with terraced houses just like ours. It’s not a particularly busy road, but it has all the usual low-key activity of the average residential area: people walking dogs, postmen delivering packages, folks getting out of cars with shopping bags, neighbors occasionally chatting with each other from their doorsteps. I idly watch all of this from my desk, gazing out absently at the ordinary goings-on whenever my mind wanders from work. 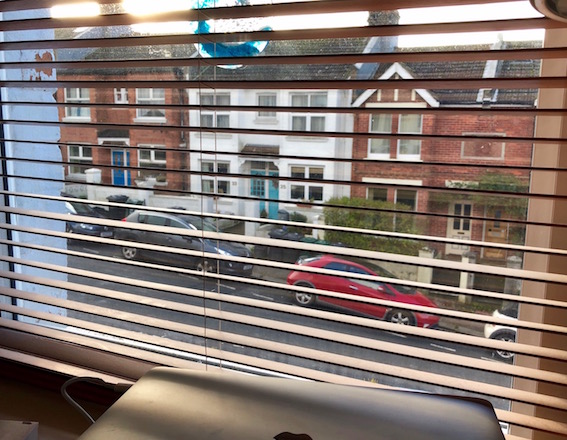 January 27th was Holocaust Memorial Day, and as social media filled up with 24 hours’ worth of variations on the themes of “never forget” and “never again,” I found myself thinking about a picture from 1943 that has haunted me since I first saw it two years ago. It’s not one of the horrific pictures from the camps or ghettos. It’s much more mundane than that, but no less affecting in its own understated way. 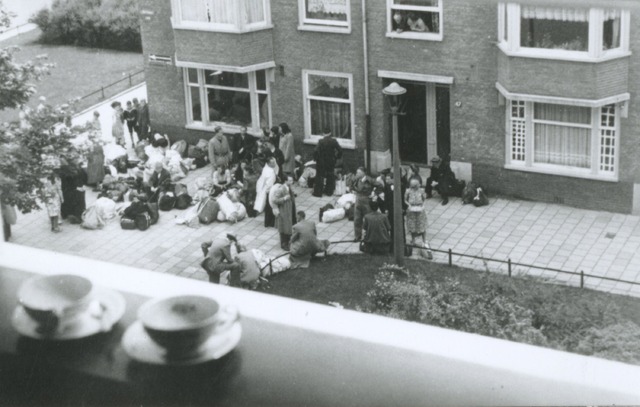 It’s a photograph that was surreptitiously snapped from the window of a flat in Amsterdam on June 20, 1943. It shows a small pedestrianized area between the photographer’s flat and the houses across the way. There are about 30 people gathered on the sidewalk, some sitting, some standing, some chatting in groups, some on their own. The women are wearing dresses, and most of the men are in suits. Dotted among them are piles of bags and rucksacks; some of the bags are being used as makeshift seats. These people are, presumably, neighbors of the person who secretly took their photograph. They are also Jews awaiting deportation.

It’s hard to tell from the reproduction of the photo, but many of these deportees seem to be at least middle-aged. A man wearing a suit and a fedora props his foot on a railing as he leans over and talks to a woman sitting slightly hunched on the same railing, white bags piled next to her. Nearby is a man in a suit, tie and overcoat, standing by himself and staring into the distance, his hands hanging from the straps of the rucksack on his back, a shapeless bag at odds with his formal attire. Another man in a suit and fedora perches on a suitcase. A woman in a knee-length floral dress with a scarf around her hair stands holding something in her hands—a tray? a plate?—as she gazes up the street expectantly.

A handful of schoolkids huddle on the corner and watch the activity, maybe not understanding what’s happening (or maybe understanding full well, since it’s 1943 and they’re likely to have seen this kind of thing before). And two people in a flat across the street lean out of their open window, their elbows propped on the windowsill, unabashedly curious and seemingly unafraid. But anxiety otherwise exudes from the photograph and the unknown photographer. He (and I’m only guessing it’s a man) hasn’t leaned out of the window; he’s stepped back from it so that he can’t be seen, his camera held at a fairly low angle, capturing the empty teacups on his windowsill. One of the teacups is slightly crooked on its saucer, as if set down in haste.

I can imagine the photographer and his companion drinking their tea and cautiously watching from their window as their neighbors assembled out in the street. I wonder if they were friendly with any of the people in the street, and if they had any idea what fate awaited those people—that they would be deported first to the Westerbork transit camp, and from there to “the East”: Theresienstadt, Auschwitz, Sobibor. Though the tea-drinkers were unlikely to know the details of this, they certainly knew that nothing good was in store for their Jewish neighbors. The Netherlands had been occupied by the Germans for three years at that point, and the registration, segregation and deportation of the Jewish population had been under way ever since, a process facilitated by Dutch collaborators. The onlookers in this photograph, and the photographer himself, could be under no illusion that there was any innocent explanation for what was happening in their neighborhood that day.

There is nothing overtly spectacular about the photo, and that’s what makes it all the more powerful to me. Without knowing the context in which it was taken, it might seem fairly innocuous. The picture itself doesn’t tell you a whole lot. You have to think your way into it, and as you do, you are forced to think about the roles being played by the people in it, and about what role you might have played in that situation, and about what role you play now.

What do you do when you look out the window and see your neighbors being rounded up and taken away? Perhaps you look on impassively, or even with approval, telling yourself that they must have done something to deserve it, or maybe that it’s just easier for everyone if they’re out of the picture. Perhaps you lean out of your window and watch it happen, then close the window and go about your day. Perhaps you want to intervene, even knowing that it’s futile, that your neighbors will be deported anyway while you’ll be arrested, or worse. Perhaps you’re compelled to send some signal of solidarity to the people outside, knowing that this is equally dangerous and futile. Perhaps you look on with pity or sympathy, but then turn away and get on with your life, because what else can you do?

And perhaps you put down your teacup with a trembling hand, pick up your camera, and—knowing that it’s dangerous, knowing that it’s futile—you secretly take a picture. But why? The photographer’s motivation is as much a mystery as his or her identity. Maybe they were part of the Dutch resistance. Maybe the tea-drinkers had Jewish friends in hiding, or friends who had already been sent away. Or maybe they were just average people who were dismayed by everything going on around them, who knew they couldn’t stop it but also knew they couldn’t just let it happen. So they did the only thing they could reasonably do on that summer Sunday in Amsterdam: they grabbed a camera, stood back from the window, and bore witness.

It made no difference in the end. The people visible in this picture were just a fraction of the 5,500 Jewish men, women and children who were rounded up in the raid in Amsterdam on June 20, 1943, and deported, most of them to certain death. This isn’t the only photograph that was taken that day. It’s not even the only photo of the raid taken secretly from an apartment window. None of the photos made a difference then. Do they make a difference now? I honestly don’t know.

I could come up with a trite conclusion, something about how these photos of frightened people being sent to their deaths should remind us of our common humanity and the need to protect those in peril, the importance of “never forget” and “never again.” And while that’s not necessarily wrong, it’s too easy, and it’s also not enough—just as it’s not really enough to quietly snap a picture of an injustice instead of attempting to stop it. The truth, though, is that sometimes even the most you can do will not be nearly enough—but that doesn’t mean it’s not worth doing anyway. The photograph changed nothing, but that’s not to say it means nothing.