A year ago at this time, Jeremy and I were in Galway. It was one of those rare occasions I mentioned in my last post when we traveled somewhere not for a conference, but just for the heck of it. It was a birthday trip for Jeremy; his birthday fell on a Tuesday, and on the following Saturday we took off for a quick weekend break in a city dear to his heart.

A fierce winter storm battered the west coast of Ireland on the day we traveled. Though our plane to Dublin was only slightly delayed, the train journey from there to Galway took much longer than the usual 2 hours because the trains had to slow down to avoid hitting any debris at high speed. We had somewhat ambitiously/optimistically made early dinner reservations at the fancy-shmancy Loam which didn’t give us much leeway for delays, so as we slowly chugged west, Jeremy called the restaurant a few times to update them on our whereabouts and assure them that we absolutely would be there, just a bit later than expected (they said they were fine with it, even though I think they kind of really weren’t). When we finally pulled into Galway at dusk, the storm had mostly blown itself out, and we hustled straight to the restaurant with our bags in tow, slightly bedraggled but excited about the meal—and the weekend—ahead. 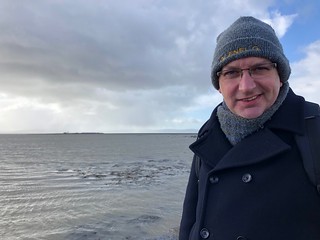 It was indeed a lovely weekend. We hopped from restaurant to music session and back again, with a bit of sightseeing in between. Unusually for Galway, the sun was even shining much of the time, so we could stroll by the water and get the wind to blow the cobwebs away before plunging back into the pubs. We left on Monday, making it back to Dublin with plenty of time for a relaxed lunch at the delightful Winding Stair before getting a cab to the airport and flying home again. That was the cab trip I briefly mentioned back in September, because the radio was on in the car and all the news was about the coronavirus and the upcoming St. Patrick’s Day celebrations, which were maybe or maybe not going to be canceled. I think of that cab ride often, always framed in terms of the disaster movie trope where there’s a news item being broadcast in the background, but the main characters don’t pick up on its importance (I believe it falls into the Ignored Vital News Report category).

It was a double-size supermarket delivery order, with cans of tomatoes and cartons of long-life milk and boxes of pasta—and a pack of wet wipes placed quite prominently on the counter. We were still about three weeks away from our first lockdown at that point, but I had already started putting together a “quarantine box” and keeping an inventory of all the food we had in the house. It felt slightly silly at the time, too much like something a “prepper” would do—but it turns out the preppers weren’t entirely off the mark. I was happy for the box in the coming weeks, though I’m much more happy now that we (ostensibly) don’t need the box anymore. We’re still technically in lockdown, but food is abundant and delivery slots are easy enough to come by, and the space once occupied by the food box is now occupied by the craft beer box (and the Square Root Soda box, because they do a really nice non-alcoholic Negroni Spritz).

My parents asked last week when our lockdown would end, and I realized that I had absolutely no idea—and not just because the latest “roadmap” hadn’t been released yet. I had no idea because at some point I stopped obsessively tracking “the numbers” and keeping up with the latest government “guidance,” and it only dawned on me later that the reason I’d stopped is simple. I know exactly when lockdown ends for me: it ends when I get vaccinated. Whatever happens on a larger scale before then is fairly irrelevant, because I’m not going to radically change my behavior now, not after coming this far and being so close to a positive resolution.

I now know that the UK start gradually be easing out of lockdown over the next month (barring unforeseen circumstances—and honestly, I’m not ruling out anything anymore). I’m not gonna lie: I’m genuinely excited by the prospect of being able to sit outside a pub or cafe in the sun again, and eventually being able to meet up with folks to play music. I started feeling truly hopeful this week for the first time in as long as I can remember. Spring is on the horizon, the sun is shining, the days are getting longer, and Jeremy and I should both be getting vaccinated in the next few months. There are things to look forward to, and I am very much looking forward to them.

But we’re not out of the woods yet, and “end of lockdown” does not mean “end of pandemic”. There seems to have been a lot of confusion about that over the past year, with too many people equating what they’re allowed to do with what it’s actually safe to do. Bars and restaurants didn’t open last summer because it was safe, they opened because an economic decision was made at the expense of a public health decision (and the subsequent rise in infections—especially following the “Eat Out to Help Out” scheme—which ultimately led to our second lockdown bears that out).

I understand that such public policy decisions are far from easy, and frankly I’m glad I’m not the one responsible for making them. But I look back on a year of locking down and opening up and locking down and opening up, and I can’t help but think of a person hitting a wall. I imagine someone repeatedly punching a wall and then realizing that their hand hurts, so they stop punching the wall, and then their hand starts to feel better again so they think, “Great, now I can go back to punching the wall”—and the cycle repeats. That’s pretty much what all the closing and opening has felt like. The infection rates are terrible, stop punching the wall! The infection rates have come down a bit, start punching that wall again!

So we’re about to start punching the wall again, but I do think things may actually be different this time around. The vaccines are changing everything, and just as importantly, folks (around these parts, anyway) are pretty good about wearing masks and keeping their distance, and I hope that continues even as more people get vaccinated. I am not naturally optimistic, but I do think better times are now within reach. We’ve lost so much, and I know there are still hardships to come, but I really (want to) believe that the darkest of the dark days are behind us. 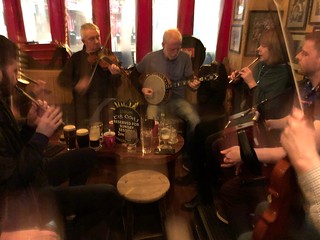