I know nothing about Edward Lach other than this: He was born in a village in southern Poland, about 20 miles from Krakow. He was six and a half years old when Nazi Germany invaded his homeland. He became a naturalized UK citizen on February 20, 1968, just a month short of his 35th birthday. He was a tailor. And at some point in his life, he donated a bench to the city of Edinburgh, his adopted home. 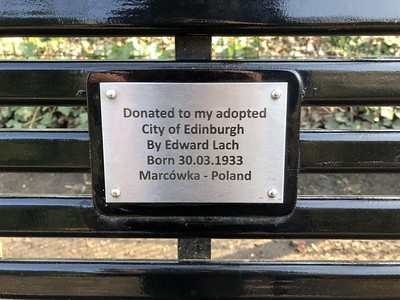 There are lots of benches with plaques on them around the Water of Leith walkway in Edinburgh. Most of the ones I saw on the morning I spent wandering the walkway had fairly non-specific dedications: in memory of, gone but not forgotten, they loved this spot. Edward’s is detailed in a way that captured my attention. Maybe it’s not unusual to memorialize a date and place of birth on a bench, but that particular place and that particular date spoke volumes to me.

According to the Edinburgh Gazette of March 29, 1968, thirteen other residents of Scotland were naturalized in February 1968, seven of them originally from Poland. One of the other new citizens, a certain Mykola Pufkyj, is listed as being “of uncertain nationality.” A quick search revealed him to have apparently been a Ukrainian who had fought against the Russians in World War II. He was captured by the Allies, and instead of being repatriated back to Soviet-controlled Ukraine after the war, he wound up on a ship of POWs bound for Glasgow. He was held in a POW camp in Lockerbie, and he eventually married a Scottish woman and settled in Lockerbie permanently.

I don’t know the details of Edward Lach’s story. He was far too young to have been a soldier in World War II, but maybe he was the son of one of the many valiant Polish servicemen who fought with the Allies and were given refuge with their families in the UK in the 1940s. Or maybe something else drew him to Edinburgh, where he seems to have made a good life for himself (and where he may still be living now, for all I know). However he got there, he clearly cherished the city enough to publicly express his affection for the place. But in doing so, he also paid tribute to his first home, his place of birth, a country that was about to be torn apart.

What do you do when a country is being torn apart, its cities besieged, its houses and shops and hospitals and theaters indiscriminately pulverized, the living population forced to fight or flee or shelter underground, the dead buried in mass graves or left lying in the streets because attempting to bury them would mean joining them, when people are being concentrated in camps and deported to enemy territory, when civilians are being executed in the streets, when a malignant force has set out to subjugate and ultimately destroy a people guilty of nothing other than claiming the right to self-determination, when a ferocious injustice is being inflicted upon innocents, unforgivable crimes committed against people who would otherwise just be going about their normal day, the same way you’re going about your normal day right now? What do you do when it’s not even “your” country and you have no obvious stake in the matter, other than that you are a human being who does not want to see fellow human beings suffer?

Assuming you have no useful skills that could tangibly help the people on the ground, I guess you just donate money to the people who do have the skills and then you go back to your regular life. That’s what I’ve been doing for Ukraine, anyway, and it feels like failure. It feels like I’m facing the very question I’ve always pondered when I think about World War II and the Holocaust—what would you have done?—and I’ve discovered that the answer is: nothing that feels like nearly enough.

Not long after the current invasion of Ukraine began, I was thinking about the International Brigades and how remarkable it was for people to quite literally fight against fascism in a country that was not their own. Just a day later, Volodymyr Zelensky put out the call for an “International Legion” of volunteers to fight in Ukraine. And though it embarrasses me to admit it, for the very briefest flicker of a moment I wondered, “Could I…? Is there anything I…?” Of course I couldn’t, and of course there isn’t, and it was ridiculous to even entertain the thought, no matter how idly and fleetingly. Ridiculous and self-centered, because it’s not about me and what I can do, it’s about what the people of Ukraine (…and Afghanistan and Yemen and Syria and Ethiopia and Myanmar…) need and what the international community can do to help them.

But as I sit here reading about the atrocities coming to light as the Russians withdraw from parts of Ukraine, I feel like there is only me alone with my conscience and my helplessness, watching people flee another country being torn apart, watching people being torn apart in a country that has seen all of this before. Those who flee might eventually find new homes elsewhere, adopted homes which they may come to cherish, and which may even cherish them back. Others will live and die in ruins that were once a home. No one should have to suffer through such things, but someone always does. For 77 years we’ve said never again, but there is always an again, again and again and again. History does repeat itself, but only ever as tragedy.