For no reason I can put my finger on, I’ve lost touch with a lot of blogs recently. In fact, I’d go so far as to say that I haven’t really read any blogs with any regularity for at least two or three years now. Whereas I used to regularly fire up NetNewsWire and trawl through my RSS feeds, I just haven’t had the energy or the interest in a rather long time now.

That changed for me this past week when I installed the NetNewsWire app on my iPod Touch and began rediscovering blogs I had completely forgotten about. One of those blogs was a lovely food blog called “i was just really very hungry”, which was written by a Japanese woman living in Switzerland. This single blog has since split into three separate blogs: a general food blog called Just Hungry, a language blog (yay!) called Hungry for Words, and then a blog called Just Bento all about—you guessed it—bento.

It is this third blog that I have been completely engrossed in for the past three days. It is absolutely packed with useful information, lovely photographs, tantalizing recipes, and great ideas for making up healthy bento boxes for lunch. For weeks now, Jeremy has been saying that he wants to bring healthier homemade lunches to work instead of constantly going out for sandwiches, and even I am beginning to get tired of the “sandwich paradigm”, as he puts it. I’ve sent him into work with salads on one or two occasions, and I do often make myself a soup or salad for lunch at home, but I must say, it never crossed my mind to make bento lunches—primarily because I assumed it was well beyond both my culinary capabilities and the amount of time I’m willing to put into a boxed lunch.

Happily, Just Bento has proved me wrong on both counts. Putting together a bento box doesn’t have to be either as complex or as time-consuming as I’d feared. The options can certainly be overwhelming, and of course there is an art to preparing and arranging Japanese food which I have no hope of mastering in this lifetime, but I think that by paring down the bento concept and using what I typically have in the house, I can make interesting, healthy lunches that at least bear a passing resemblance to proper bento lunches.

I started today, in fact. After eating out all weekend, I still had a whole veg box worth of vegetables, and I knew I had some sushi rice in the cupboard, and some eggs in the fridge, so I decided to try my hand at a little impromptu bento. And what do you know: I think it actually worked!

I was intrigued by the rice balls known as onigiri, so I followed the instructions for making easier onigiri with a bowl and plastic wrap and turned out a couple of passable triangular onigiri with a small piece of smoked anchovy inside each one (just ‘cause that’s what I had in the fridge): 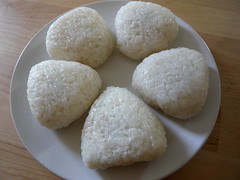 I also tried a one-egg tamagoyaki (folded omelette), which turned out yummy if not exactly as nicely layered as it should have been. I blanched some broccoli and dressed it with soy sauce and chili flakes, and then made a simple salad with cucumber, carrot, soy sauce and vinegar. In lieu of a proper bento box, I got out a Tupperware thingie which seemed to be about the right size, tucked my various goodies into it (separating the broccoli and salad from the rice with a big cabbage leaf), got out some chopsticks, and voilà: 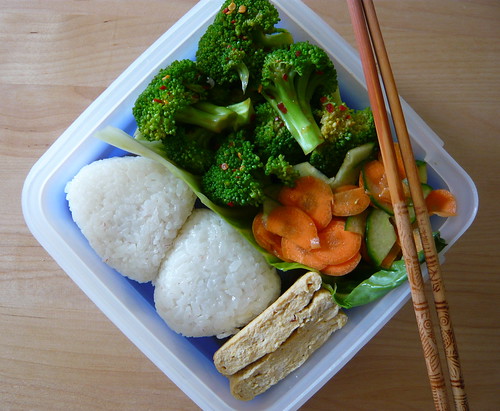 I was so pleased with it that I went out and bought a Lock & Lock box with dividers that I think is a good size for a bento lunch, as well as more sushi rice and some sheets of nori, and some fresh sesame oil and sesame seeds for dressing veggies.

I’m certainly not renouncing ham sandwiches or the occasional quiche from the bakery across the street, but I’m very excited about exploring the world of bento. Lunch has suddenly become much more interesting.

I love "Just Bento". I have been reading it for over a year and it has been good to see all the recipes and ideas that she has.

Thank you, Maki - you really are a foodie inspiration! And I enjoy your @mainichinihongo tweets as well… :-)