Time was short; I heard about the contest just a few days before the entries were due, and I knew my initial ideas—creating an album sleeve with embroidery or cross-stitch (neither of which I’ve done in years)—would take too long to get together. Knitting? I couldn’t see how that would work. Collage? Tedious, and I didn’t have enough magazines to cut up. Lego figures? Too obvious, and I’d have to buy them. Painting? I don’t have any paint, either—and anyway, I can’t paint. Beads…?

Beads. I have tons of beads. Baggies and boxes and tubes of beads in all shapes and colors, beads that I buy because they’re sparkly and pretty, then generally tuck away in a box with all my other beads and never wind up using because they’re too sparkly and pretty (see also: my yarn stash). I thought maybe I could get a kind of stained glass effect by printing out a picture of an album cover and then fixing the beads to the picture with glue or double-sided tape—which I also happen to have plenty of thanks to my on-again/off-again relationship with paper-crafting. Beads it would be. 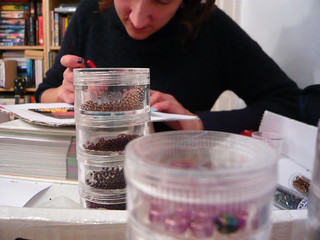 There were plenty of album covers to choose from, but No More Shall We Part seemed to be the best fit in terms of available beads, skills and time. It also kind of looks like stained glass already, so that boded well for the final product. Jeremy was able to “pixellate” the album cover in Photoshop for me so it would be easier to see where to place the beads, and a quick test showed that I would still be able to make out the picture even when it was covered by double-sided tape. 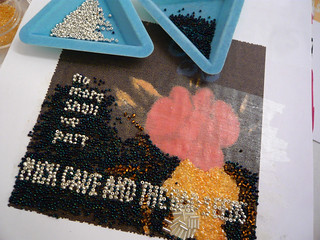 There was just one problem: I had no idea if it would actually work. Would the beads really stick to the paper or just roll off? Would the colors really match? Could I get enough detail in there that you could still read the words on the cover, or would everything just look like blobs? And, crucially, was I vastly underestimating the amount of time and effort the whole project would take? There was just one way to find out—so I set myself up with paper, beads, scissors, needle-nose pliers, toothpicks and tape and got to work. 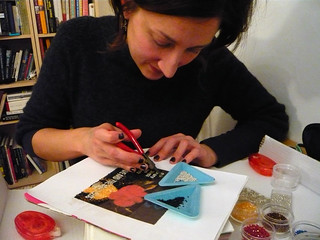 I realized immediately that the whole process would be much more “fussy” than I initially hoped; except for the few expanses of single colors, most of the beads had to be placed individually with the pliers (and we’re talking seed beads here, which are only about 2 mm). The lettering was especially painstaking, but as soon as I had carefully placed that first precious word—NICK—I kind of squealed and bounced around a bit because I knew that it would work after all. It would take a loooong time (about 4 hours in total), but it would work. 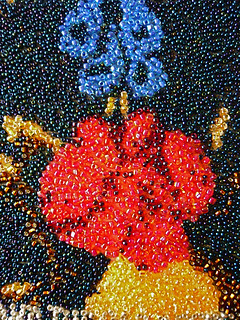 So, I have recreated the cover of No More Shall We Part by sticking seed beads on paper. The deadline for entering the competition is tomorrow at midnight, and the winners will be notified by Wednesday evening. I’ll be a nervous wreck until then, and if I don’t manage to win a pair of tickets I will undoubtedly cry—but at least I’ll have a pretty handmade artifact as evidence of my ongoing dedication to the Cave cause. 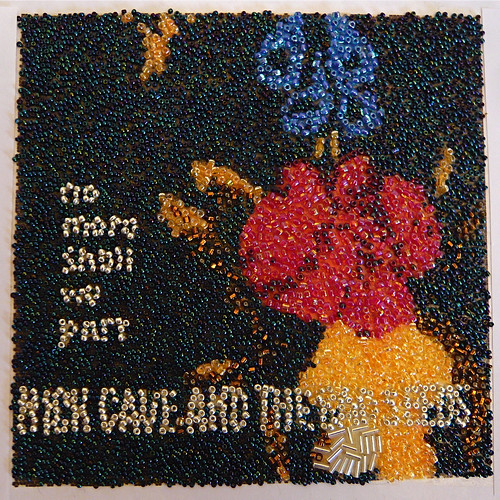 This got “winner” look written all over!

So glad about your news! Congrats. :)