So, we’ve been back from Ireland for about 48 hours - and we’ll only be here for less than another 24 hours before we head off to America for our second Christmas vacation. That leaves me just enough time to write a blog entry to apologize for not updating so much when I was in Ireland and to promise to update more while I’m in the States (don’t hold your breath).

Ireland was great. Christmas was warm and cozy, with abundant amounts of turkey, ham and Christmas pudding. New Year’s was very, very low key - both Jeremy and I were sick, so we spent New Year’s Eve on the couch in front of the TV, and we feebly toasted in the new year with hot whisky.

Most evenings we were out in the pub, because that’s just what you do. We almost never go out in England, thanks to the bad beer and stupid closing times. But in Ireland - well, the stout really is better, and there’s no one standing over you at 11:00 p.m. ready to grab the drink out of your hand and push you out the door. It was a refreshing change.

Because of the late closing times, there were many late nights. It seemed that even when we had all intention of going home early, something would occur to keep us out late. Case in point: the night before we took off for Galway. We thought we’d go out for one drink, meet up with a few people, and be back before midnight. Instead, as we were preparing to leave the pub around 11:30, a mandolin appeared from nowhere and Jeremy was cajoled into playing a tune. Two and a half hours later we finally managed to make it out - only because the police showed up in the middle of a very boisterous sing-song and made everyone leave. Ah, the larks.

Galway was a blast, as always. We met up with a lot of old friends (and made some new ones), and there was more music than you could shake a fiddle bow at. Seafood, too, featured highly on our agenda. If it’s seafood in Galway, it has to be McDonagh’s Seafood Bar for the most enormous, incredibly cheap, terribly yummy plates of fish and chips you’ll find anywhere. We actually ate there twice in three days: once for fish and chips, and once for "proper seafood", i.e., fish soup and grilled mackerel for Jeremy, and a gigantic bowl of steamed mussels for me.

Down below is a picture I took one evening in Galway. It was bitterly cold the whole time we were there, but the sky was crystal clear (the bright, blurry spot in the upper left was a gorgeous crescent moon). The Christmas lights everywhere made the town feel very festive. Galway also has one of the best things any city anywhere can offer: it’s pedestrianized, which makes it a joy to wander the streets and look in the shop windows. If I were to live in Ireland, I think I would want to live in Galway.

So that was Ireland. Tomorrow we head for Arizona, and for restaurants with the most enormous, incredibly cheap, terribly yummy plates of Mexican food you’ll find anywhere. The next post will be from the desert! 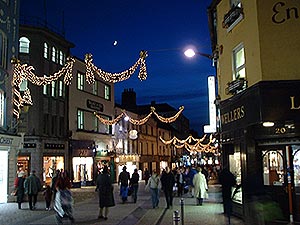