Hello, November 1st—and hello NaBloPoMo! It’s my first post of the month, and, amazingly, I actually have something to say…

I’ve just returned from a great weekend in Hamburg with a head that’s swirling with thoughts and images (or maybe that’s just from the head cold I picked up along the way). I managed to pack a lot into a few short days and had the pleasure of both hanging out with old friends and meeting “new” people with whom I’ve worked for years but never seen in person—an odd but very rewarding experience. I also got to (briefly) experience the night-life on the Reeperbahn, and I had a total nostalgia trip in a tiny, dark, smoky German bar, where I lingered drinking cheap beer until 5 AM (which I definitely paid for the next day).

But the ultimate purpose of my trip to Germany was to attend the opening of the new documentation center at the Bergen-Belsen concentration camp memorial, and this experience is really what dominates my thoughts at the moment. Over the past year and a half or so, my friend Schorsch and I translated and proofread all of the English texts for the bilingual (German/English) exhibition at the documentation center—everything from wall panels to subtitles for videos—along with all of the speeches and press releases to accompany the opening ceremony this past Sunday.

It was a tremendous amount of work, particularly for Schorsch, who dealt directly with the Bergen-Belsen memorial for the duration of the project. But the enormity and significance of it all didn’t really dawn on me until Sunday, when I walked into the new exhibition hall and finally saw our work in situ. Prior to the trip, I thought I might well spend the entire day at Bergen-Belsen crying, or at least extremely emotionally distressed. As it was, tears sprang to my eyes only two times, the first time being when I first laid eyes on “our” words displayed on the giant illuminated panels which make up the majority of the exhibition. It’s not often I get to see my work in a form other than a Word document, and looking at the exhibition, I felt a mixture of pride at having achieved so much and humbleness at having been allowed to play a part in something so important.

About 1,000 people attended the opening on Sunday, including roughly 100 survivors of the camp. In the morning, we were all bussed from the camp itself to a nearby British army base, which had served as an emergency hospital and displaced persons camp after the war. We filed into the former officers’ club on the base, where we were treated to a number of speeches—the worst being from the German political bigwigs, and one of the best (and definitely most hard-hitting) being from Stephan Kramer, Secretary General of the Central Council of Jews in Germany, who certainly did not pull his punches when criticizing the lack of long-term support for concentration camp memorials around Germany.

After the speeches and some musical interludes, we headed back to the camp for a wreath-laying ceremony at the memorial inscription wall. The throngs of people and press meant that I didn’t actually get to catch any of the brief ceremony itself, but once the politicians had breezed off again after laying their wreaths, Schorsch and I had the opportunity to explore the grounds a bit.

There isn’t really anything left of the camp itself, since all the huts were burned down by the British after liberation to prevent a typhus epidemic. All that remains now are the mass graves and several monuments and memorials scattered around the site. We noticed that a group of people had gathered around the Jewish memorial, and as we walked towards it in the direction of the documentation center, Hebrew chanting rang out across the barren grounds. Speakers and a microphone had been set up at the Jewish memorial, and in the middle of the group of people there, an old man sang and recited the Kaddish, his voice reverberating through the former camp and joined by the voices of those around him. I hesitate to write this because I know it sounds melodramatic, but as he chanted, I had a shockingly vivid image of the words emanating from him and rolling out across the graves like a blanket, gently covering the remains of the camp’s thousands and thousands of victims and maybe, hopefully, giving the spirits in that terrible place some bit of rest.

When the chanting ended, we made our way back to the documentation center, which was officially opened by the architects. Looking at the exhibition the second time around, surrounded by visitors, was a completely different but equally exciting experience. It was fascinating to see people interact with the exhibits and gather around the media stations which showed newsreels and interviews with former prisoners. What made it even more fascinating is that many of those former prisoners—or the children of former prisoners—were there at the opening. As Schorsch and I walked through the exhibit on the displaced persons camp which operated after Bergen-Belsen concentration camp was liberated and razed, a red-haired woman beckoned us over and, pointing at black-and-white photos of a couple holding newborn twins, said with a beaming smile, “This is me!” She had been born in the DP camp—and, even more amazingly, she and another visitor to the exhibition had just discovered that they were related.

And this, actually, was representative of the tone of the entire day for me. The Bergen-Belsen memorial is as much about honoring the survivors and their children as it is about commemorating the dead. I had gone to the opening expecting to be put through an emotional wringer, and while it was certainly emotional, by the end of it all I felt more uplifted than anything else. I feel very honored to have been able to make some contribution, however small, to the creation of this new exhibition. The memorial itself is of worldwide significance, and it’s personally significant to me to feel that I’ve done something truly worthwhile. 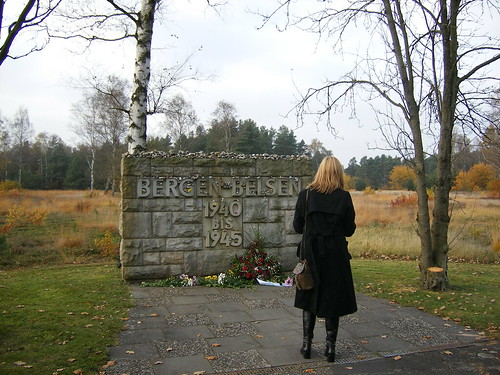 Photo taken by my friend Schorsch

It truly is the appropriate post for today, Dia de los Muertos. Thank you.

I am very glad that you had the opportunity to attend the ceremony.

Hey, just dropping by from the NaBloPoMo blogroll.

Wow. That is something truly worthwhile. When you work on something for a long time it is fantastic to see the end result, isn’t it? And your work will be there for a very long time. It isn’t often we create something lasting like that. This is by far the best first NaBloPoMo post I have seen yet.

As if posting 30 posts a month wasn’t enough, I’m trying to comment on as many blogs as I can as well. We have a group on NaBloPoMo as well.

Thank you for the comments!

Wow, Snoskred, you’ve definitely taken on a double challenge—it’s going to take all I have just to keep up with my own blog posts! :-) I like the "comment challenge" idea though, since it forces you get out there and interact with other blogs and other people, rather than just sitting comfortably in your own blog, so to speak. I may have to follow suit…