I was sure I knew my Cindy Li friendship origin story: we first met at SxSW 2006.

I can see us standing in the hallway of the convention center—me, Cindy, Jeremy—during a break between talks. Jeremy was in his element, surrounded by his peers, excited, happy, brain and body moving a mile a minute. I was…lost. Back then, SxSW Interactive was minuscule compared to the behemoth it has become today, but it was still the first conference of that scale I’d ever been to, and I was overwhelmed at the start. There were too many people around me, too many things going on, and I wanted to hide, and to cry.

But Cindy was there. Jeremy had to run off, I was facing the prospect of a lonely lunch somewhere or other—and Cindy took me under her wing (her broken wing, as it were—she was walking around with a bedazzled cane after hurting her knee swing dancing, I believe). She was not about to leave me in the lurch, because she never left anyone in the lurch. Her instinct to reach out and include people was as natural as mine was to run away. So she included me in her plans that day (which, knowing Cindy and SxSW, probably involved steak), and we were friends forevermore. And that’s how I met Cindy Li.

That scene at SxSW is all true, but we had actually met a year earlier at a conference in London. We bought fish and chips at the Tower of London, and a seagull pooped on them. Cindy even came down to Brighton on that trip, where we fed her scones and Marmite and probably tried to feed her jellied eels, and she gave me a necklace she had made, and a seagull pooped on her again. The seagull thing is supposed to be good luck, and if you consider our subsequent 13 years of friendship, I guess maybe it was. Seagulls brought us together. 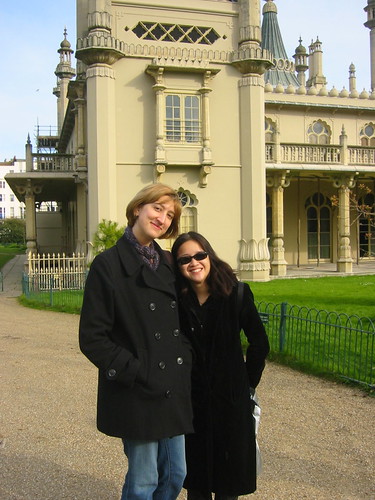 Except it was actually swans.

Over the years, Cindy and I often mused on how we might have been in the shop at the same time when we were kids. She was sure she remembered seeing me standing in front of the pastry case. I have no reason to doubt it; my family practically lived in that shop, and I always had my face pressed to the glass, trying to decide what treat to have next. Maybe there was a day when we sat on opposite sides of the café, eating our pastry swans, never realizing that food and friendship would unite us decades later. 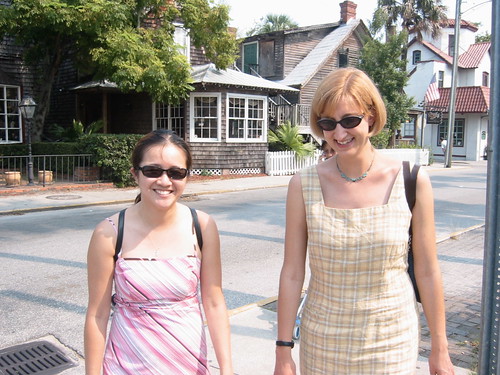 There was always a lot of food. Our conversations revolved around food, our encounters revolved around food. When I think of Cindy, I think of those first fish and chips in London and that steak in Austin, but I also think of eating macarons with her in the sunshine in San Francisco, I think of sitting next to her at her wedding and eating scallop mac and cheese, and I think of standing next to her as she poached lobster for Jeremy’s birthday, I think of her making mochi-covered strawberries and pressing hot homemade pork buns into our hands as we left her house to go to the airport and fly home.

I think of all the restaurants we visited together, and of our epic, truffle-tastic evening at the French Laundry, and of the one that got away: Alinea, our lodestone, what could have been our last great food adventure had fate not been such a bastard. We had chatted about what we would wear and whether we would be able to steal (or eat) the table decorations. Reading back through our text messages, that still makes me laugh.

I think of sitting with her in DeNoels’ pastry shop in 2005, where we finally ate swans together for the first time. And I think of visiting her last year and spending several days hunched over cookbooks and pots and pans, making choux pastry and custard and whipped cream, and piping out swans’ necks onto baking trays, and delicately assembling all the different parts until we had two beautiful platters of our own homemade pastry swans, the culinary culmination of a friendship that started before we ever even realized it, when we were just two kids in a pastry shop who hadn’t yet met. 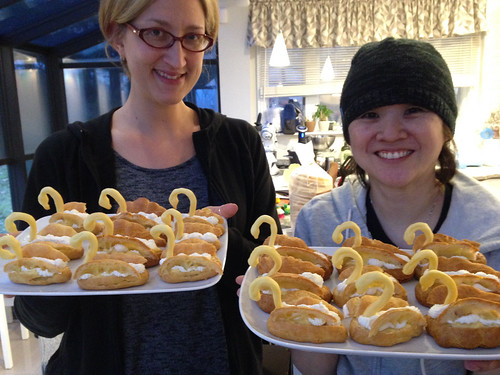 Cindy could cook anything, fix anything, create anything—or at least she had no fear of trying. She would visit us and repair broken stuff around our house. She could make the most incredible costumes, decorate cakes, paint, draw, sew, throw themed parties, organize dinner for 20 people at the drop of a hat. Even when she was exhausted, even when she wasn’t well, she never stopped creating and never stopped caring for others.

She always seemed to direct all of her energy outwards, to the people she loved and who loved her in return. Cindy’s life was a demonstration of what it means to be a good person and a good friend. She attracted a huge circle of fiercely devoted people because she was so kind and devoted herself, and to have been counted among her friends is an honor I did not and do not take lightly.

Cindy lived more fully in every minute of the time she had than most people could ever dream of—but her few short decades weren’t nearly, nearly enough. We all miss you, Cindy, so very much. 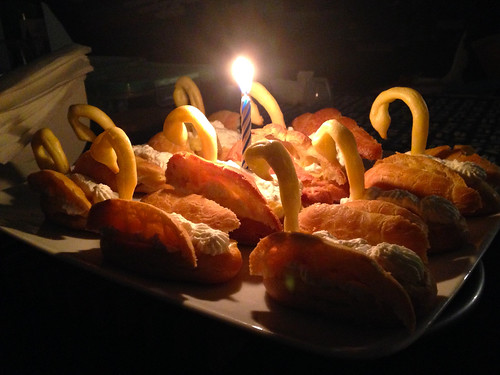 A beautiful remembrance of a beautiful and amazing young woman. I know how difficult this was for you to write…Cindy would be so pleased.

Sending all our love and condolences, Jessica.