Three weeks from now, Jeremy and I will be joining about 50 other people in the German countryside to celebrate the 25th anniversary of two dear friends. There will be drinking, there will be dancing, and there will be food—and that food will be cooked by a group of food-loving volunteers including yours truly.

Thinking about catering for a group of people in the middle of nowhere got me thinking about “Hackfarm”: Back in November 2011, Jeremy’s company went on a kind of retreat, and I went along as their cook. It was a fairly intense experience, and I subsequently wrote a long blog post about it—which I then inexplicably never shared with anyone. I don’t see any reason not to share it now, so here goes:

About a year ago, Clearleft spent a week in a farmhouse in the wilds of Herefordshire doing webby-hacky things. When Jeremy first told me about the plans for this “Hackfarm,” I immediately tried to think of ways I could contribute so that I could spend a week in a farmhouse, too.

I don’t have any webby-hacky skills, so I jokingly said, “I could be the caterer!”—meaning that I could maybe cook the occasional pot of soup to feed the hungry hackfarmers at lunch. I didn’t think my offer would be in particularly high demand seeing as Clearleft has plenty of excellent cooks in its ranks and they really don’t need me to feed them. But I guess I thought wrong, because last November I found myself in that farmhouse in Herefordshire, standing over the biggest pot known to man, attempting to stir tomato sauce into three and half pounds of spaghetti while 12 hungry people sat around a ginormous dinner table waiting for my food.

I’d never prepared food on this scale before—several nights in a row, no less—so this week in the countryside was a real trial by (cooking) fire for me in the “catering” stakes. And what did I learn after cooking the equivalent of 67 plates of food (as well as a big pot of soup, a few pies, a batch of cookies and some cake) in the space of 6 days?

Okay, I knew this already, but knowing something is one thing and feeling it is another, and after spending hours in the kitchen every night for three nights in a row, I definitely felt it. I felt it in my feet (now I understand those cushioned rubber mats that they advertise for professional cooks), I felt it in my arms (moving full catering-size pots around the kitchen takes some strength), I felt it right down to my fingers (I love my big santoku knife, but after slicing 3 pounds of onions, that thing feels heavy). 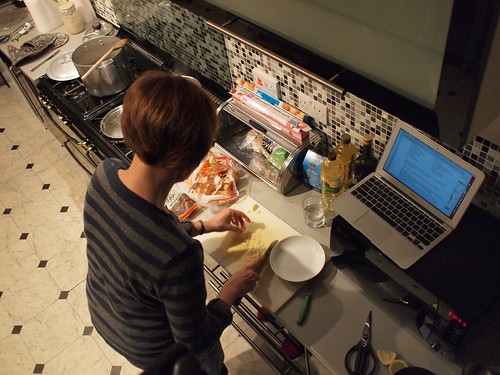 Cooking on a large scale night after night was both a physical and a mental challenge, because coordinating what needed to be done when was as taxing as actually doing it. I’m exceptionally pleased that I got my timings more or less right throughout the week, so when I told everyone dinner would be ready at 8 o’clock, it was generally ready at 8 o’clock—but that involved keeping a lot of mental spreadsheets open in my mind (“Pie 1 has 15 minutes to go, pie 2 has 25 minutes to go, it’ll take me 20 minutes to peel and chop vegetables, pan 1 needs to start heating up in 10 minutes, the chicken will take 45 minutes…”).

2) The planning is more work and less fun than the execution.

The most stressful part of the whole catering thing wasn’t standing over a trough of boiling water in a sweltering kitchen squeezing sticky Spätzle batter through a giant metal press (Whose idea was that? Oh yeah…mine.). The most stressful part was sitting in front the Sainsbury’s website for 6 hours (I’m not even joking) trying to figure out how much of what stuff I would need to keep 13 people fed and watered for a week.

Just coming up with menus was an exercise in anxiety. How do you cater for different tastes, needs and expectations without either running yourself into the ground by cooking different things for every single person, or boring everybody by resorting to pasta every single night? I didn’t just want to feed people, I wanted to please them with my food. I wanted to give them dishes they maybe weren’t familiar with but were likely to enjoy. I wanted to share some of my favorite recipes with a wider audience, and I wanted to experiment a bit, too. So, yeah…I didn’t make things easy for myself. 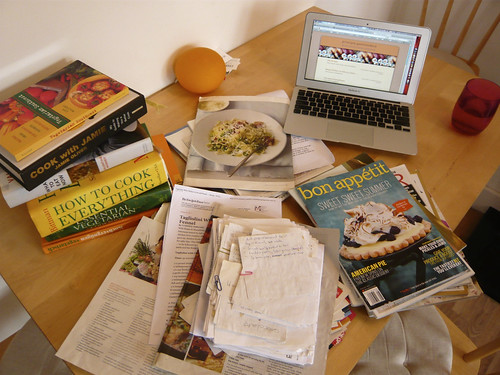 On top of the dinner menus, I needed to figure out what people would be eating for breakfast, lunch, afternoon nibbles and late-night snacks. I put what I learned from Science Hack Day to use and made sure to get healthy snacks (fruit) along with the unhealthy ones (chips). Lunch generally consisted of sandwiches, so I got all the usual sandwich fillings and condiments and just tried to make sure that everyone had some variety available to them. For breakfast, I figured most people would maybe grab a bowl of cereal or slice of toast, with the occasional fry-up happening when someone was motivated enough to make one. This was one of my bigger mistakes, and it brings me to Point 3:

We showed up at the farm on a Monday afternoon and got a gigantic Sainsbury’s delivery on Monday night. That food was supposed to hold us over until we could get another order a few days later, but when I got up Tuesday morning and went downstairs, I found that all of the bread and eggs I thought would last for days were gone. GONE.

It turns out that, when freed from the confines of a 9-to-5, get-up-and-go-to-work existence, boys will merrily scramble, poach or fry mountains of eggs and serve them with mountains of toast for breakfast every single morning (maybe girls do this too, but in this case I was pretty much surrounded by boys). Who knew? I sure didn’t, so there were a few emergency trips to local shops to re-stock the cupboards and satisfy the seemingly endless desire for eggs and bread. I eventually lost track of how many cartons of eggs and loaves of bread we tore through, but it must have been in the double digits. It was truly astonishing.

4) It’s rewarding to be appreciated by others.

Obviously I like to cook, so spending hours in the kitchen is more fun than hardship for me. But when it comes to feeding other people, that’s only one half of the story. The other half is the response from the people you’re feeding. Cooking for others feels like a type of performance, in that something you’ve created is being put before someone else to be “judged” to some extent—judged whether it’s enticing, tasty, filling. When you put so much time, effort and love into something, you can’t help but want your actions to be appreciated—and I’m happy to say that the hackfarmers were an appreciative lot indeed. 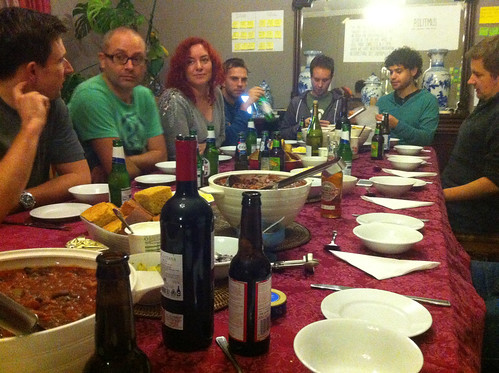 I heard more than once that it was great to come into the dining room after a hard day of hacking and see a tasty homemade dinner spread out on the table. I got to enjoy the experience of other people enjoying my food, which made the food all the tastier to me. I didn’t do it all for thanks and praise, but I can’t deny that it warms my heart to hear someone say “This is delicious”—or even “I don’t know what we would have done without you.” It makes me think all the hard work was worth it.

5) It pays to listen to your inner adventurer.

In the run-up to the week away, I got progressively more freaked out about what I had gotten myself into: “I can’t do it. No one will like the food. People will be hungry. I won’t get the meals cooked on time. Stuff will be undercooked/overcooked. They’ll regret having asked me to come. I’ll be embarrassed and ashamed. I’m going to fail.” I tried to counteract my inner critic with my inner adventurer: “This is exciting. I get to spend a whole week doing something I enjoy. This is will be an interesting learning experience. It’s okay if things don’t always go as planned. I’ll just do my best, which is all anyone can do.” My inner adventurer turned out to be right, of course: I did my best, things didn’t always go as planned, and it was okay. This may sound trite, but for someone who grapples with the type of destructive perfectionism that corrupts any real sense of achievement about anything, it’s the hardest thing in the world to accept.

I think I’ve managed to accept it—so much so that when the Clearlefties head off to a another remote house soon, I’ll be going with them again, knife case and recipe folder in hand, for yet another week of pots, pans and putting myself to the test all over again. 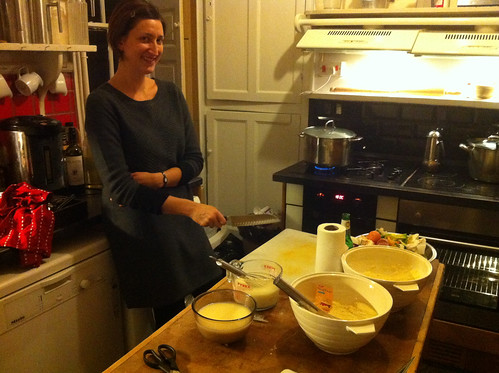 I did indeed cater the second Hackfarm, which, for various reasons, turned out to be more stressful and less fun than the first (not least because I was cooking for more people in a much smaller kitchen). The egg thing was confirmed the second time around, as was my inability to cope with a kitchen full of guys frying a billion eggs when I just wanted to grab a cup of coffee; turns out I’m not so good at dealing with lots of people first thing in the morning—who knew? But no one starved, and no one got stabbed with a kitchen knife, and I proved myself to myself once again. There’s even a video of me talking about the experience, which I find quite amusing (who is that person?), and a picture of me looking really quite irritated with a sandwich, which I find even more amusing (oh yeah, that’s definitely me).

Anyway, I won’t be cooking on my own in Germany, and I’m not doing the planning. I’ll be part of a veritable kitchen brigade, chopping and stirring and serving alongside others, which very much sounds like where I’d like to be. (Just maybe not first thing in the morning.)