I’ve had the same desktop images on my computer since 2008. That’s the year we went to Japan for the first time and I became immediately and all-encompassingly obsessed with mameshiba. If you search for “mameshiba” online now, you’ll turn up all sorts of sites, including a Wikipedia page and an entry on Know Your Meme. But at the time, these bean dogs were all but unknown outside of Japan, so they felt like my secret, wonderful discovery. I grabbed every mameshiba-branded item I could find while we were still in Tokyo, and when we got back home I went around singing the jingle incessantly and surrounding myself with mameshiba imagery (when I like something, I go ALL IN on it).

That imagery included (once I was able to find them online) mameshiba desktop pictures, which I downloaded and put into permanent rotation on my computer. Every day I’ve been in Brighton for the past 12 years, I’ve turned on my computer and seen a different mameshiba looking back at me with its adorable and slightly creepy eyes. Even when I got a new computer, I eschewed the options for different backgrounds and immediately re-installed my mameshibas. They’ve been my constant companions for over a decade.

But just as it’s changed so many things, the pandemic has even changed that. After spending months inside without a break, surrounded by the same views, months sitting at my window-facing desk every day and peering out through the slats of the blinds at the same white house with turquoise doors across the street (which is, admittedly, very pretty), I long for a different view. Specifically, I long for the Mediterranean, for views of white stone and turquoise seas, water glittering on a golden beach, resinous scrub clinging to warm rocks in the sun. As much as it is a physical yearning to be somewhere else, it is a psychological yearning to see something else, a vista not hemmed in by buildings. An expanse, a horizon.

Granted, I can walk to the top of our hill and see a vista, and it’s very lovely. We did just that on Friday, actually, and it was even more exciting than our usual stroll because we strolled WITH PEOPLE (and a dog!). Specifically, we met up with four other folks who have also been stringently isolating themselves, and we wandered up Sheepcote Valley, taking in the sea views, and the sheep views, and the wild grasses rippling in the breeze. Jeremy and I hadn’t been out for a walk in ages, and I could feel the sunlight and air and (distanced) social contact reviving something inside of me that had started to go dormant. My stomach unclenched as I looked at the distant horizon and listened to the rustling grass and bleating sheep. I guess a change really can be as good as a rest.

But back home, I have the same old boring view out my window with no prospect of that changing anytime soon. So my computer desktop has become my window. I trawled through the pictures I’ve taken on our travels over the years and picked out a selection of them that spoke to my desire for sun and sea. They’re mostly seascapes of one sort or another: the aquamarine Adriatic against the city walls of Dubrovnik, the crystalline Mediterranean on a beach in Tel Aviv, a sailboat in the Cook Strait between the North and South Island of New Zealand, multiple views of the beach in St. Augustine. There are a few random cityscapes thrown in there for good measure, including a picture I took in Singapore that looks like a work of speculative architectural fiction and, on the very opposite end of that scale, several photos of sun-baked Athens because when I look at them, I remember what it was like to stand there in person (getting massively sunburned) and be truly awed at the ancient spectacle of the place. The pictures fill me with longing and satisfy a longing at the same time.

In a funny moment of synchronicity, I got an email this week from Akelarre restaurant in San Sebastián, Spain. Back in 2013, Jeremy took me to San Sebastián for a weekend so we could eat at Etxebarri restaurant for my 40th birthday. The day after my birthday meal at Etxebarri, we had a stunning lunch at Akelarre. In many ways the two restaurants couldn’t be more different, though each in its own way gave me one of the best meals and experiences of my life. While Etxebarri is tucked away in a tiny village in the rugged Basque mountains, Akelarre perches on a hill overlooking the Bay of Biscay just outside busy San Sebastián. Akelarre had emailed to say they were reopening soon, and the email featured a picture of their (fairly new) outdoor terrace with cozy sunken seating and nothing but the blue bay beyond.

It was exactly what I’ve been craving, and the email gave me a pang of longing so intense it was painful. I longed to be in San Sebastián in 2013, when “pandemic” was just a really good board game and not a way life, when we could cram ourselves into packed pintxo bars at night and worry only about whether we’d be able to get the bartender’s attention, and we could sit in the warm, bright dining room of Akelarre with the water sparkling all around us and worry only that we’d eat so much for lunch we wouldn’t have room for pintxos later on (not a chance). I want a warmer sun and bluer sea, a softer breeze and bluer sky, and I want the worries of the world to be burned off in that sun and washed away in that sea.

For now, the pictures will have to do. 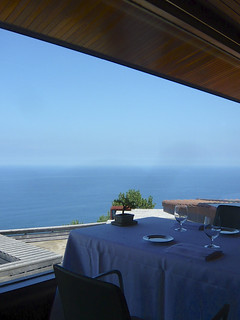